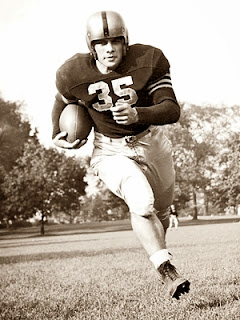 Doc Blanchard was born on December 11, 1924 in McColl, South Carolina. His father was a doctor and the family moved frequently when Felix was a child before settling in Bay St. Louis, Mississippi. He seemed to be naturally gifted in athletics, and while at Saint Stanislaus College in Bay St. Louis led the school's football team to its first undefeated season in 1941, resulting in offers from Notre Dame, Fordham and Army, which he refused. Now nicknamed "Doc" due to his father's occupation, he chose to play for the University of North Carolina Tar Heels, in part because its coach was a relative.

In 1943, Doc decided to enlist in the Army. He was stationed in New Mexico with a chemical-warfare unit until July 1944, when his father secured him a spot at West Point in July 1944. During his three years of playing for West Point, Doc racked up an undefeated streak of twenty-seven games. An all-around athlete, Blanchard served as the placekicker and punter in addition to his primary roles as an offensive fullback and a linebacker on defense, and his skills won him the Heisman trophy in 1945, as well as the cover of Time magazine. He had the opportunity to play professional football after being selected third overall in the 1946 NFL Draft by the Pittsburgh Steelers, but was refused a furlough.

In 1947, Blanchard played himself in the movie The Spirit of West Point, the same year that he graduated and commissioned a second lieutenant in the United States Air Force. He coached Army’s freshman team in the 1950s, but never played professionally, choosing a military career as a fighter pilot instead. He would be inducted into the College Football Hall of Fame in 1959.

While with the 77th Tactical Fighter Squadron and flying back to his base at RAF Wethersfield near London in 1959, a gas leak in his F-100 Super Sabre broke and caught his plane on fire. Rather than escaping and parachuting out safely, he decided to stay with the plane and land it safely, because of a village on the ground that would have been damaged. The event garnered him an Air Force commendation for bravery. In the Vietnam War, Blanchard flew 113 missions from Thailand, 84 of them over North Vietnam. He piloted a fighter-bomber during a one-year tour of duty that ended in January 1969. He retired from the Air Force in 1971 as a colonel and spent several more years as the commandant of cadets at the New Mexico Military Institute.

Blanchard died of pneumonia on April 19, 2009 in Bulverde, Texas, where he had been living with his daughter for the last twenty years of his life. He was interred at Fort Sam Houston National Cemetery in San Antonio, Texas. In Blanchard's honor, the Interstate 20/U.S. Route 15 interchange near his hometown of Bishopville, South Carolina was named the Felix "Doc" Blanchard Interchange. 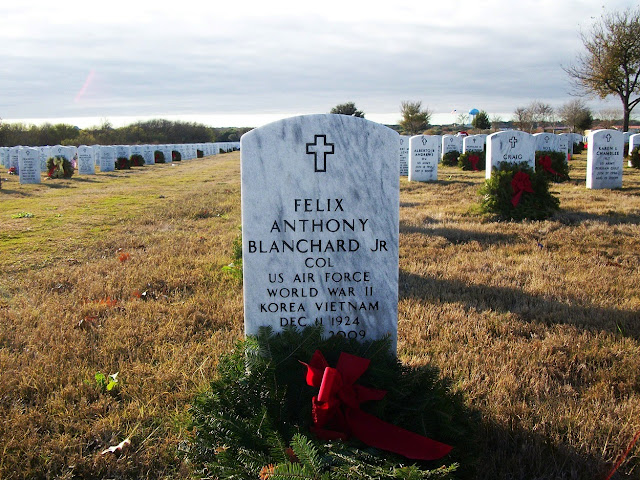