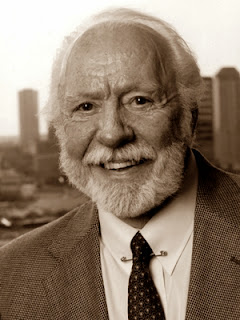 John Emmett Lyle, Jr., member of the Texas and United States House of Representatives and the Texas State Cemetery Committee, was born near Paradise in the village of Boyd, Wise County, Texas, on September 4, 1910. A third generation Texan, he graduated from Wichita Falls High School and attended the junior college there, before enrolling in The University of Texas at Austin. While in Austin, he worked as a night watchman in the basement of the Capitol. After graduating from UT, he attended the night school branch of the Houston Law School, and, in 1934, began a legal career that ultimately spanned 69 years. At the suggestion of Governor James Allred, he moved to Corpus Christi, Texas, and set up a private practice. However, in 1939, he was elected to the State Legislature representing a district comprised of Nueces, Duvall and Jim Wells Counties.

In the beginning of World War II, in 1942, he volunteered and took his basic training as a private in the Army. He was sent to Officer Training School where he graduated as a second Lieutenant. He was then assigned as a platoon leader to an Automatic Weapons Battalion in the 536th. That battalion was quickly sent to North Africa where he experienced combat as well as in Malta, Sicily and Italy. He was awarded a Purple Heart in the Anzio campaign and while serving as an infantry officer in the Arno River campaign, he was nominated and elected to the U. S. Congress for the fourteenth District of Texas. This District was made up of 19 counties. Congressman Lyle became the ranking member on the powerful Rules Committee. He served five terms and chose not to stand for reelection.

Congressman Lyle returned to South Texas and resumed the practice of law being active in the State Bar Association. He served on the State Board of Directors of the State Bar Association and as President of the Nueces County Bar Association. During that period as a lawyer and businessman, he represented many individuals, major energy companies, and served on corporate boards of both public and privately owned companies. He was a long time member of the Board of St. Luke's Hospital. During those years he served on Presidential Commissions under President Kennedy, Johnson, Reagan and most recently, in 1994, appointed by Presidential Clinton to the Federal Council on Aging. In 1963, he moved to Houston, Texas, where he continued to practice law and remained a member of both the Texas Bar Association and the American Bar Association. He was an active trustee for the David Dewhurst Trust as well as a member of the Board of Directors of numerous Falcon Seaboard companies. He was an active member of St. Martin's Episcopal Church and served on the Vestry, as Senior Warden, and as a member of the Senior Council. John Emmett Lyle, Jr. passed away on November 11, 2003, and was buried in the Texas State Cemetery. Source 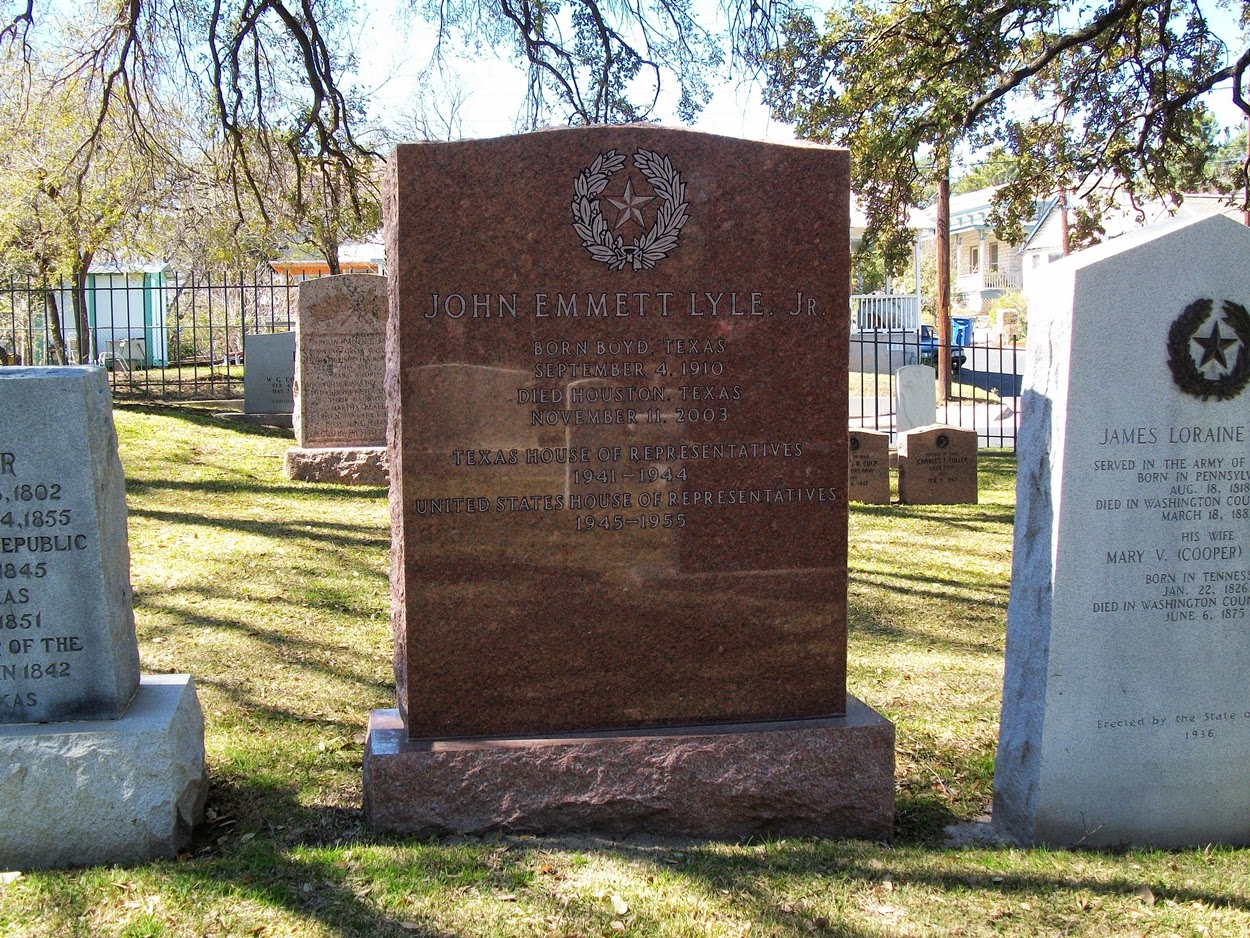 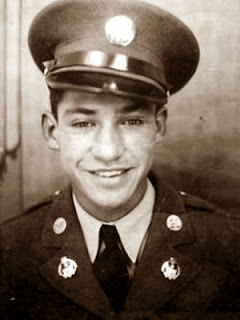 Mike Pena, Korean War Medal of Honor recipient, was born in Corpus Christi, Texas on November 6, 1924. He joined the U. S. Army as an infantryman in 1941 when he was 16 years old and served in both World War II and the Korean War. On the evening of Sept. 4, 1950, near Waegwan, Korea, his unit was fiercely attacked. During the course of the counter-attack, Pena realized that their ammunition was running out, and ordered his unit to retreat. He then manned a machine gun to cover their withdrawal and single-handedly held back the enemy until morning when his position was overrun and he was killed. Michael Pena received the Medal of Honor posthumously in 2014.


CITATION
For acts of gallantry and intrepidity above and beyond the call of duty while serving as a member of Company F, 5th Cavalry Regiment, 1st Cavalry Division during combat operations against an armed enemy in Waegwan, Korea, on 4 September 1950. That evening, under cover of darkness and a dreary mist, an enemy battalion moved to within a few yards of Master Sergeant Pena’s platoon. Recognizing the enemy’s approach, Master Sergeant Pena and his men opened fire, but the enemy’s sudden emergence and accurate, point blank fire forced the friendly troops to withdraw. Master Sergeant Pena rapidly reorganized his men and led them in a counterattack which succeeded in regaining the positions they had just lost. He and his men quickly established a defensive perimeter and laid down devastating fire, but enemy troops continued to hurl themselves at the defenses in overwhelming numbers. Realizing that their scarce supply of ammunition would soon make their positions untenable, Master Sergeant Pena ordered his men to fall back and manned a machine gun to cover their withdrawal. He single-handedly held back the enemy until the early hours of the following morning when his position was overrun and he was killed. Master Sergeant Pena’s extraordinary heroism and selflessness at the cost of his own life, above and beyond the call of duty, are in keeping with the highest traditions of military service and reflect great credit upon himself, his unit and the United States Army. 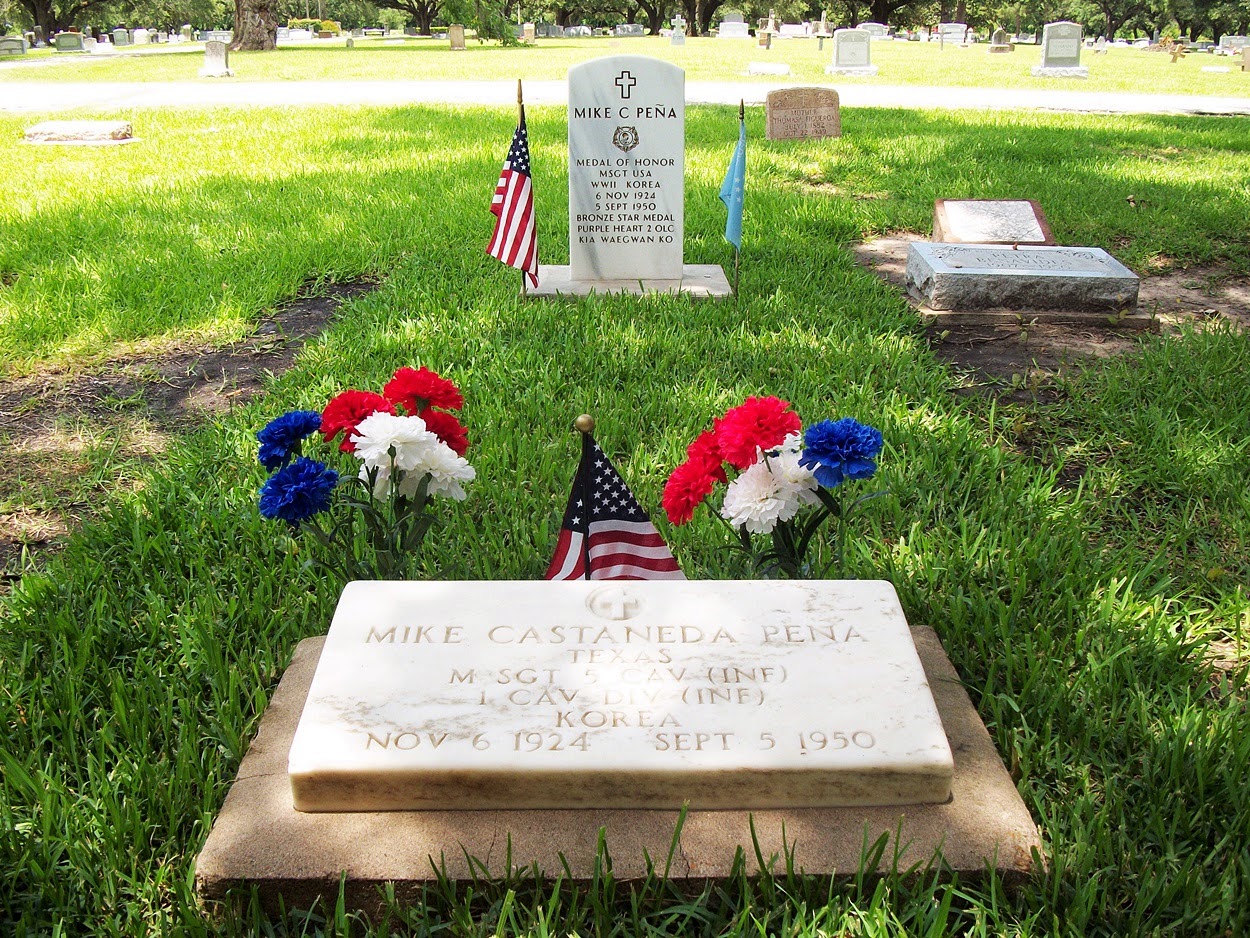 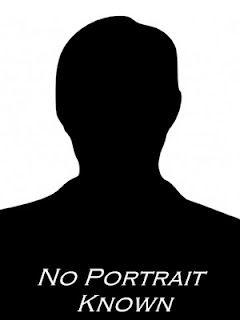 William Polk Milby, Republic of Texas congressman and Calhoun County merchant, was born in Delaware on January 5, 1809. After first moving to Maryland, he traveled to Texas by way of Louisiana about 1841 and settled initially in Liberty County. He was elected to represent Liberty in the Seventh Congress of the Republic of Texas. He then moved to Port Lavaca and served as county clerk of Calhoun County from 1848 to 1858. In 1853 he acquired land six miles southwest of Indianola, where he tried to develop the town of Cayloma. Five years later he served as commissioner of the Indianola Railroad Company. By 1860 Milby was living in Indianola, where he owned $55,000 in real and personal property, including two slaves. Milby supported secession and was badly hurt by the Civil War and a fire that destroyed his mercantile house in 1867. By 1870 his property was valued at only $1,600. The Indianola storm (1875) destroyed his home. Ironically, he had been one of a three-man commission that had cooperated with the federal signal service's coastal reporting station. Milby and his wife, Mary, a native of Pennsylvania, had at least eight children. Milby was a Mason and Episcopalian. He died on February 2, 1887. Source 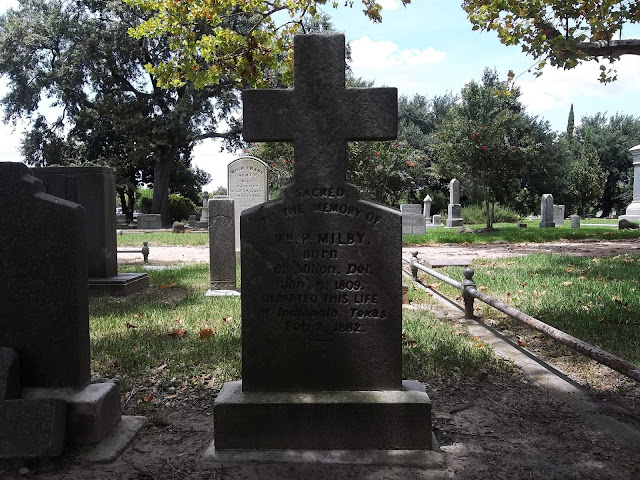 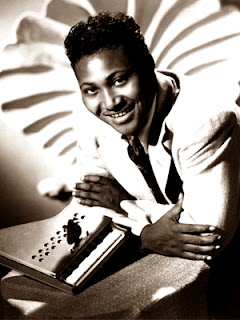 Amos Milburn, rhythm-and-blues pianist, singer, and bandleader, was born in Houston on April 1, 1927. Milburn, called "the first of the great Texas R&B singers," began developing his talent at an early age. When he was five years old his parents rented a piano for his sister's wedding, and in less than a day young Amos had taught himself to play Jingle Bells. His parents enrolled him in piano lessons, but Milburn jumped ahead by lingering outside local taverns and juke joints and imitating what he heard. In 1942 he lied about his age to enlist in the United States Navy. He spent just over three years in the Pacific Theater, where he entertained troops with his lively piano tunes. Upon returning to Houston he put together a band and played in clubs all over the city and the surrounding suburbs. His music so impressed local fan Lola Cullum that she allowed him to practice on her baby grand piano and helped him to record After Midnight. She then took the record and Milburn to Los Angeles, where she visited Eddie Mesner, president of Aladdin Records, in his hospital room and played the record for him. Mesner signed Milburn immediately. Milburn began recording for Aladdin on September 12, 1946.

In twelve years he recorded about 125 songs, most of them arranged by saxophonist Maxwell Davis. After Midnight sold more than 50,000 copies. In 1949 Milburn was Billboard's best-selling R&B artist. Davis, acting as sax soloist and producer, helped Milburn on seven of his greatest hits: Chicken Shack Boogie, In the Middle of the Night, Hold Me Baby, Bad Bad Whiskey, Good Good Whiskey, Vicious Vicious Vodka, Let's Have a Party, House Party (Tonight), Let Me Go Home, Whiskey, and One Scotch, One Bourbon, One Beer. These songs and others made it to the Top 10 of Billboard's charts in the early and mid-1950s. Milburn's rocking, boogie-woogie piano style greatly influenced such younger stars as Fats Domino and Little Richard. Some of Milburn's songs, such as Let's Rock a While (1951) and Rock, Rock, Rock (1952), anticipated mid-1950s rock-and-roll. Milburn ended his association with Aladdin in 1954. He continued to perform, often with such greats as Charles Brown and Johnny Otis. He toured the country, playing nightclubs in various cities, including Los Angeles, Cleveland, New York City, Dallas, Cincinnati, and Washington. He also recorded for labels such as Ace, King, and Motown. However, he had achieved his greatest success by 1953. No stranger to alcohol, as his song titles suggest, Milburn was often ill. He suffered two strokes, lost a leg to amputation, and was an invalid for some time before his death in Houston on January 3, 1980. He was honored with induction into the Blues Foundation Hall of Fame in 2010. Source 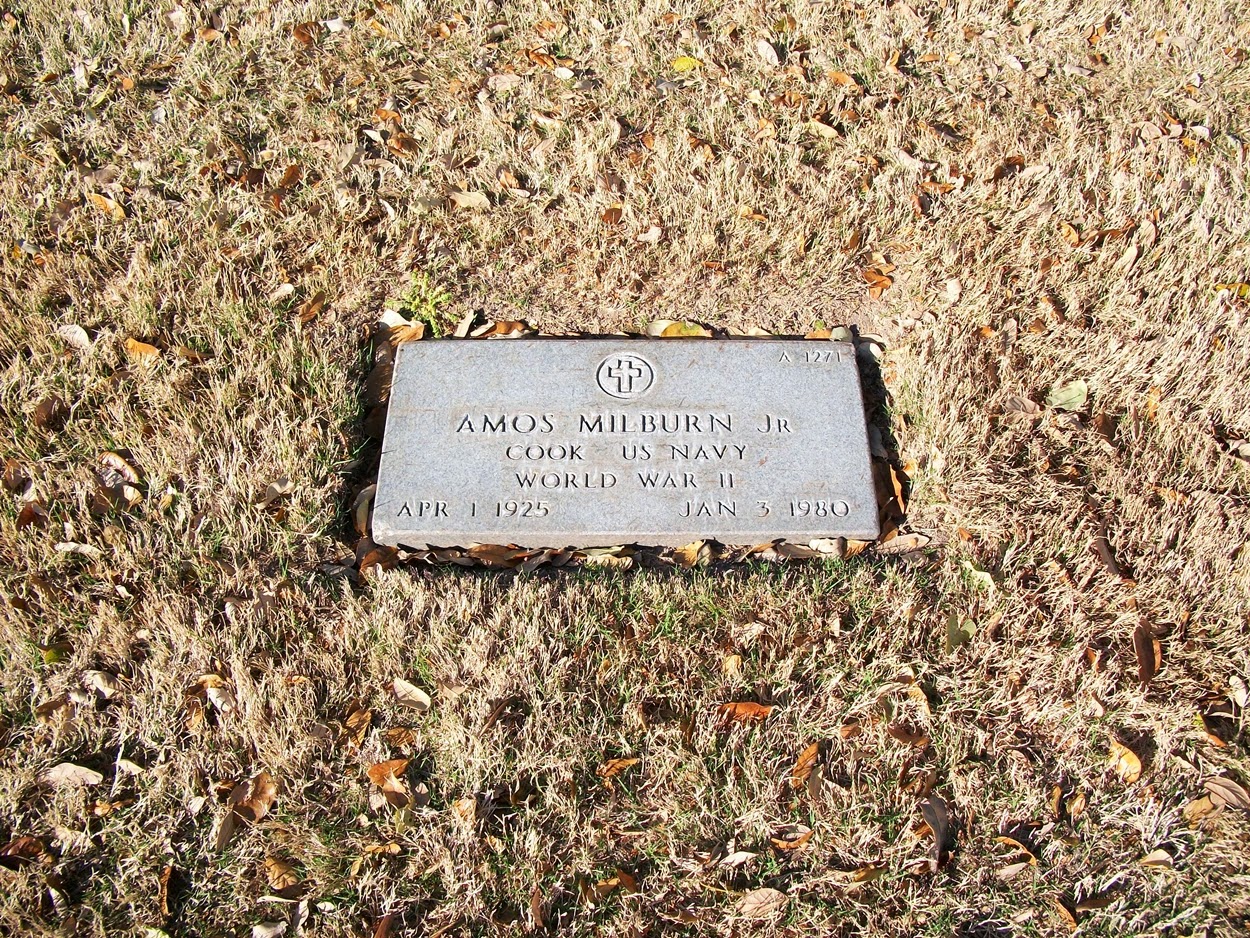