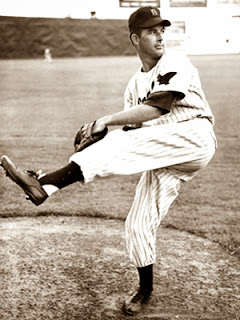 Wayne McLeland was an American professional baseball player, a right-handed pitcher whose 11-year (1942; 1946-1955) career included ten games played in Major League Baseball for the 1951-1952 Detroit Tigers. Born in Stockport, Iowa, August 29, 1924, and nicknamed "Nubbin", he stood 6 feet tall and weighed 180 pounds. He was a veteran of the United States Army, serving during World War II. Originally signed by the St. Louis Cardinals after his 1940 graduation from Stockport High School, McLeland was named the 1950 "pitcher of the year" in the Double-A Texas League, as he won 21 of 29 decisions and compiled an earned run average of 2.49 in 267 innings pitched for the unaffiliated Dallas Eagles franchise. He was acquired by the Tigers after that season and spent most of the 1951 and 1952 campaigns at the Triple-A level of minor league baseball, with three brief trials with the Tigers. In his only starting role in MLB, against the Chicago White Sox on September 9, 1951, he allowed four earned runs in 4 innings and took the loss in a 4-3 defeat. During his brief ten-game Major League tenure, McLeland allowed 24 hits, 13 runs (all earned), and ten bases on balls in 13 total innings of work; he failed to record a strikeout. He settled in Houston, Texas, after his baseball career ended and spent 35 years working for the Goodyear Tire and Rubber Company. He died on May 9, 2004 in Houston and buried in an unmarked grave.

Note: Wayne McLeland's grave is unmarked. It is located between the graves of Herman P. Wilson and A. DeWitt Chaddick. 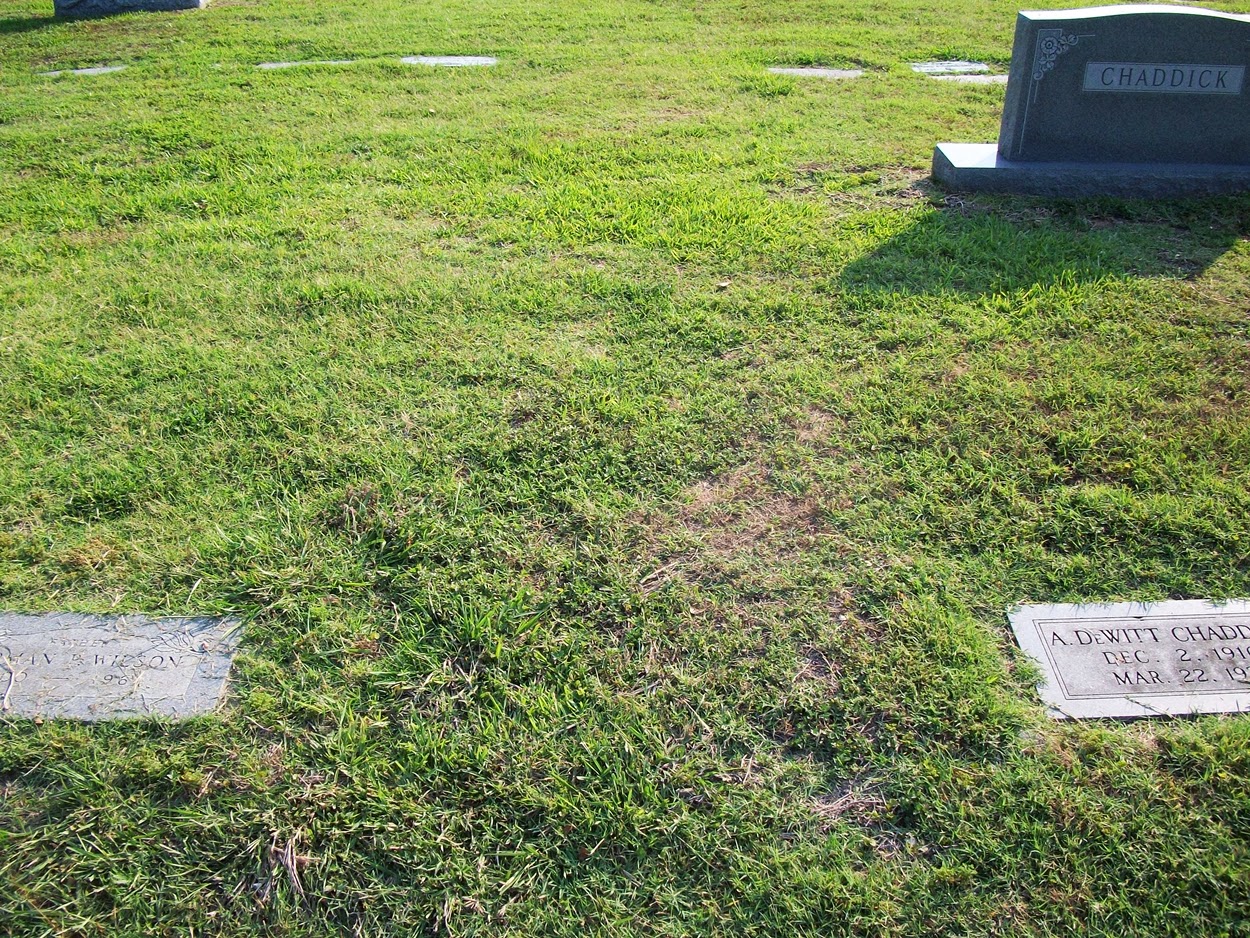 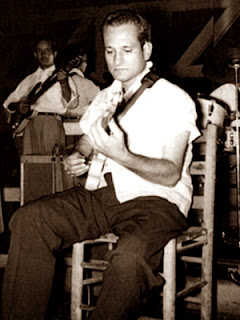 Cam Hill was born Maurice Cameron Hill (he later dropped his first name) on February 7, 1919, in Rusk, Texas, to Annie V. and Henry T. Hill. Both parents were music lovers and encouraged their son to sing and play the guitar. The eldest of seven children, Hill began playing when he was nine. By 1930 he was playing guitar and singing on KLUF radio in Galveston; his father accompanied him on mandolin. While still a teenager, Hill joined the Civilian Conservation Corps (CCC) in the mid-1930s and helped build roads and parks in East Texas. His cousin Truman Welch, also a guitarist, also joined the CCC, and together they played music at any venue where they could earn money. Hill and Welch performed with the Vance Brothers in Palestine, and in 1939 they joined Moon Mullican's outfit, the Night Riders. Later, Hill and fiddle player Leo “Micky” Lane moved to Illinois for several months, then returned to Texas and played beer joints with Shelly Lee Alley in Houston.

In December 1939 Hill joined the Texas Wanderers who were being heard on Houston’s KXYZ radio. His first recordings were with the Texas Wanderers for Decca in April 1940. The band included pianist and singer Moon Mullican. When Mullican left the Texas Wanderers, most of the band, including Hill, left with him and they headed for Beaumont, where they played on KFDM radio as Moon Mullican's Texas Wanderers. When this band broke up in 1941, Hill went to Hot Springs, Arkansas, and joined his cousin Truman Welch to work with Pee Wee Roberts & His Skyliners on KTHS radio. In 1942 Hill joined the Village Boys, broadcasting on Houston’s KTRH radio during the day and playing at clubs in the evenings. While in Houston, he met fellow guitarist Jimmy Wyble, and the two became firm friends and headed for the West Coast in 1943. They were strongly influenced by the newly-emerging swing jazz form which gave a voice to the electric guitar, particularly that of Charlie Christian. Hill and Wyble recreated Charlie Christian’s solos, which Hill could play note for note. Hill, Wyble, and noted steel guitarist Noel Boggs were playing in a small Los Angeles club where they met pianist Millard Kelso, who was playing with Bob Wills. Kelso suggested that they audition for Wills and set up the meeting. The three played with Wills at the Santa Monica Ballroom. Hill and Wyble made such an impression that they were hired on the spot; Boggs joined shortly after.

At the time, Hill and Wyble set the standard for electric twin guitar leads and solos in western swing. From 1944 until 1945, Cameron Hill played and recorded with the Texas Playboys and can be heard on Armed Forces Radio transcriptions. He also worked in movies with Wills, including Bob Wills and His Texas Playboys (1944), Rhythm Round-Up (1945), Blazing the Western Trail (1945), and The Lawless Empire (1945). In spring 1944 Wills organized his largest band to date, with seventeen instrumentalists and two vocalists. Hill and Wyble were the guitarists. But this version of the Playboys only lasted about six months. While with the Playboys, Hill met and married Wills's first female vocalist, twenty-four-year-old Laura Lee Owens. In December 1945 Hill and Owens left the Playboys and returned to Houston. Cameron joined the military, and Laura joined Dickie McBride's band. In 1946 they were divorced. Hill worked and recorded with Dickie Jones and the Skyliners in Houston, but by 1947 he had moved back to Los Angeles, where he played on Roy Rogers’s recordings of With A Sweep of My Sombrero, Old-Fashioned Cowboy, and Betsy. Hill was then hired by Spade Cooley and reunited with Jimmy Wyble, who was also in the Cooley band. While playing with Cooley in 1948, Hill met vocalist Becky (Mary Ruth) Barfield, who had performed at the Grand Ole Opry and reportedly taught Eddy Arnold how to yodel. Hill and Barfield were married in 1949.

Bob Wills’s vocalist Tommy Duncan left the Texas Playboys in 1948 and joined forces with his brother, bassist-vocalist Glynn Duncan. They recruited Cameron Hill, Jimmy Wyble, Millard Kelso, Noel Boggs, Joe Holley, and Ocie Stockard to form the Western All Stars. Hill, Wyble and Boggs left the All Stars in July 1949. Hill then worked with his wife in the Wade Ray Band, before moving on to lead his own band, the Texas Sundowners. The Texas Sundowners worked in Los Angeles and made regular trips back to Houston, where Hill, between 1951 and 1954, played recording sessions and worked with local bands. He moved back to Houston in 1954. In May 1955 at ACA Studios in Houston, Hill played on a session with Slim Whitman, which produced the hit, I'll Never Stop Loving You. In 1955 he played on Floyd Tillman’s recording, Baby, I Just Want You, which Hill co-wrote with Tillman. Returning to California in 1956, Hill rejoined Wade Ray’s western swing band and played on radio and television and worked in clubs. Becky Hill joined the band some time later. In 1958 Cameron Hill played on what were to be his last recording sessions, with piano player Merrill Moore. These tracks were a mix of light jazz and popular music, recorded for Capitol, and included Music, Music, Music and Back Home in Indiana. Becky Hill passed away in 1958 in California. Hill left the West Coast, returned to Texas, and then went to Las Vegas to work in the Golden Nugget’s house band. He returned to Houston in 1961. In 1962 Hill, dogged by illness, moved in with his sister and brother in-law, Colleen and E. B. Wheeler, in Pasadena. His children, Rebecca and Cameron, went to live with family members in Pearland. Cameron Hill died in Houston, on June 22, 1962. Source 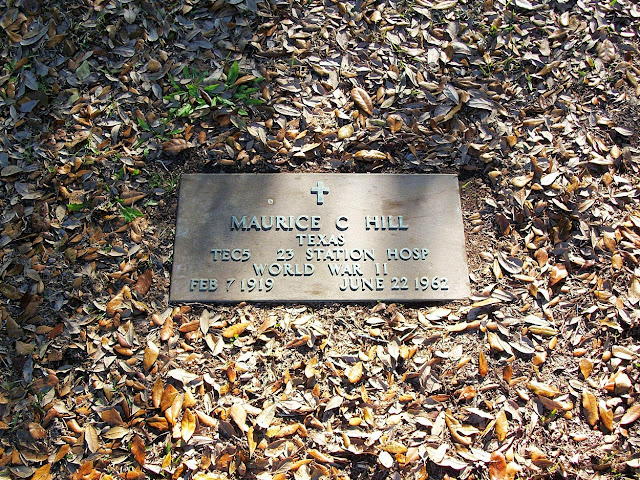 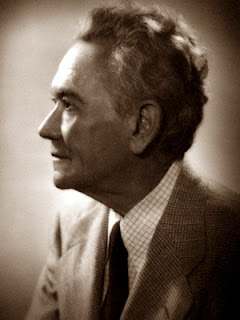 Royal Dixon was an American author, animal rights activist and a member of the Americanization movement. He was born in Huntsville, Texas, to Elijah and Francis Elizabeth Dixon, and educated at the Sam Houston Normal Institute, Morgan Park Academy, Chicago and later as a special student at the University of Chicago. His earliest career was as a child actor and dancer trained by Adele Fox, but his acting career was short, with his last performance being at the Iroquois theater in Chicago in 1903. He became a curator at the department of botany at the Field Museum of Chicago from 1905 to 1910, then subsequently became a staff writer at the Houston Chronicle. He made special contributions to the newspapers of New York, where he lectured for the Board of Education and founded a school for creative writing. His interest and attention were later directed to immigration, as a director of publicity of the Commission of Immigrants in America, and as managing editor of The Immigrants in America Review. He published a book, Americanization (1916), on how immigrants needed to be "Americanized" into a single uniform culture.

In 1921, he founded the First Church for Animal Rights in Manhattan which at its peak had a membership of about 300 people. His aim was to "awaken the realization" that animals have "the inalienable right to life, liberty and the pursuit of happiness." He and his partner, a local artist named Chester Snowden, moved to Houston in the late 1920s. Dixon's letters and works are archived at the University of Houston Library. As an author, his published works include The Human Side of Plants (1914), The Human Side of Animals (1918) and The Ape of Heaven (1936). Dixon passed away on June 4, 1932 and was interred at Glenwood Cemetery in Houston. 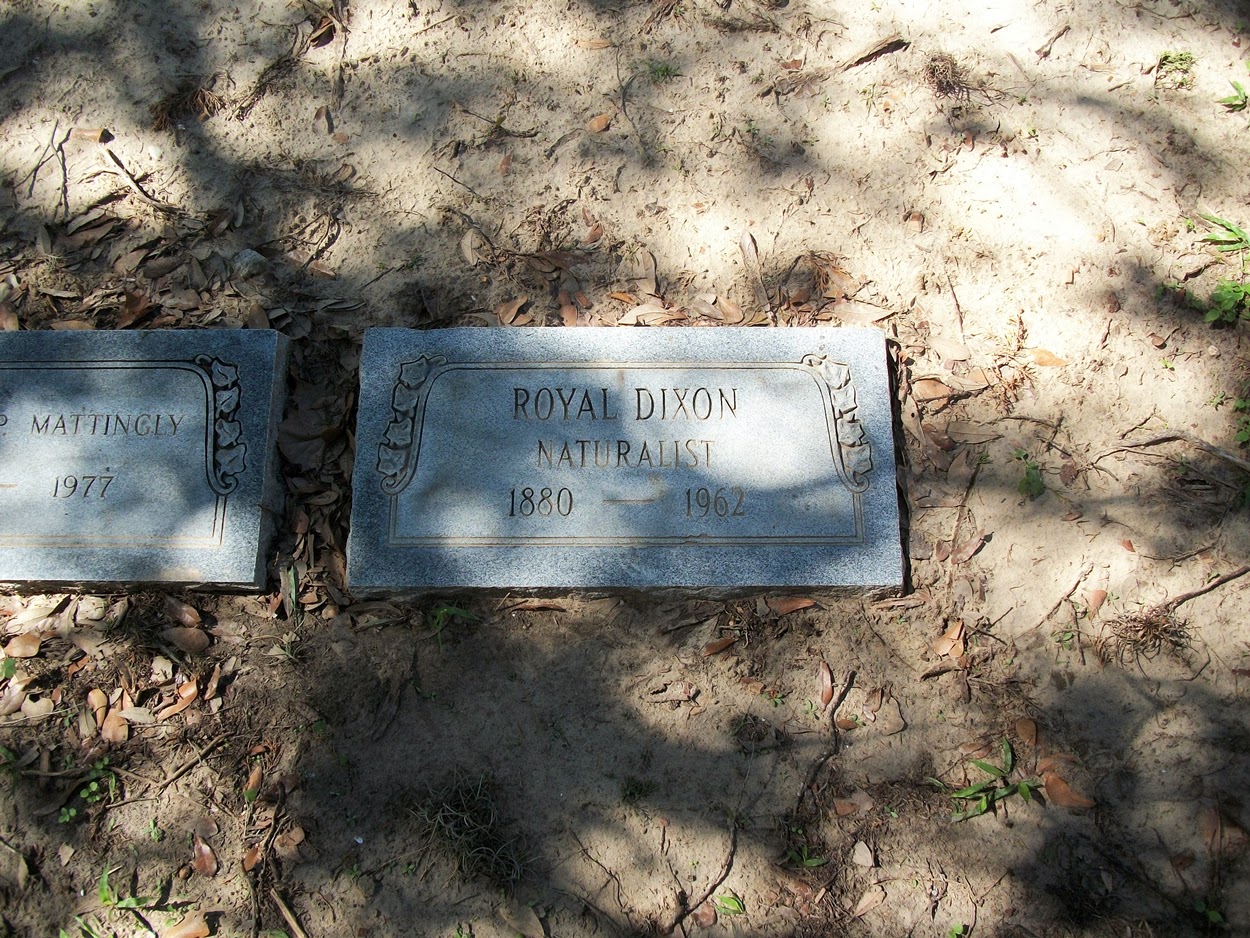 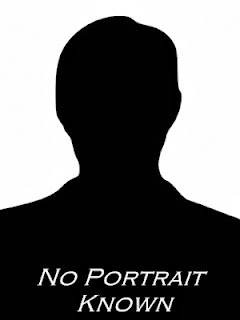 Amy Comstock White, early settler, was born on March 10, 1775, in Rhode Island to William and Rachel (Aldrich) Comstock, who migrated to St. Martinville in Spanish Louisiana. She was baptized a Catholic in the church at Opelousas on July 25, 1789, and married William White, older brother of James Taylor White in St. Martin's Church on January 31, 1791. She and her husband settled near his brothers on the lower Vermillion River below Abbeville, where she bore eleven children between 1792 and 1819 and became a widow on October 8, 1821. On the advice of Humphrey Jackson, her widowed brother-in-law, Amy White decided to move in 1824 to Galveston Bay, where she and her married sons could each receive a league of land. She claimed her 4,428 acres on the west side of the San Jacinto River on August 16, 1824, while her eldest son, Reuben White, located his on August 19 on the east bank, opposite his mother and below Jackson's plot. White then returned to Louisiana where she and the other heirs of her husband settled his estate on September 14, 1824. Soon thereafter the widow and her four minor children left for the San Jacinto River in company with Reuben and his wife and three children; son George; and her daughter and son-in-law, Mary and William Whitlock and their four children. Another son, Jesse, arrived in 1830. Amy White did not depend on her male relatives to take care of her business, and in June 1825 she wrote to Stephen F. Austin that surveyor Isaac Hughes had included another person's home in her league without her knowledge, and the man was not willing to sell the improvement. By May 28, 1828, Amy White had married William Swail and deeded her league to him. The couple moved to his league on the west side of the Trinity River, just above Liberty, where Swail probably died some time before 1838. At age sixty-two Amy White Swail petitioned the Liberty board of land commissioners (as Amy White) for her allotted labor of land, which was granted on January 19, 1838. The biographer of the White clan says that she died in 1853 in either Harris County or Liberty County. Source

Note: Unmarked. The modern-day White Cemetery evolved from the original White family cemetery, now located to the rear left of the grounds. Although Amy White's grave location has been lost, she is likely buried in the area shown in the photo below, as this site contains the oldest graves and the still-standing tombstone of her son William. 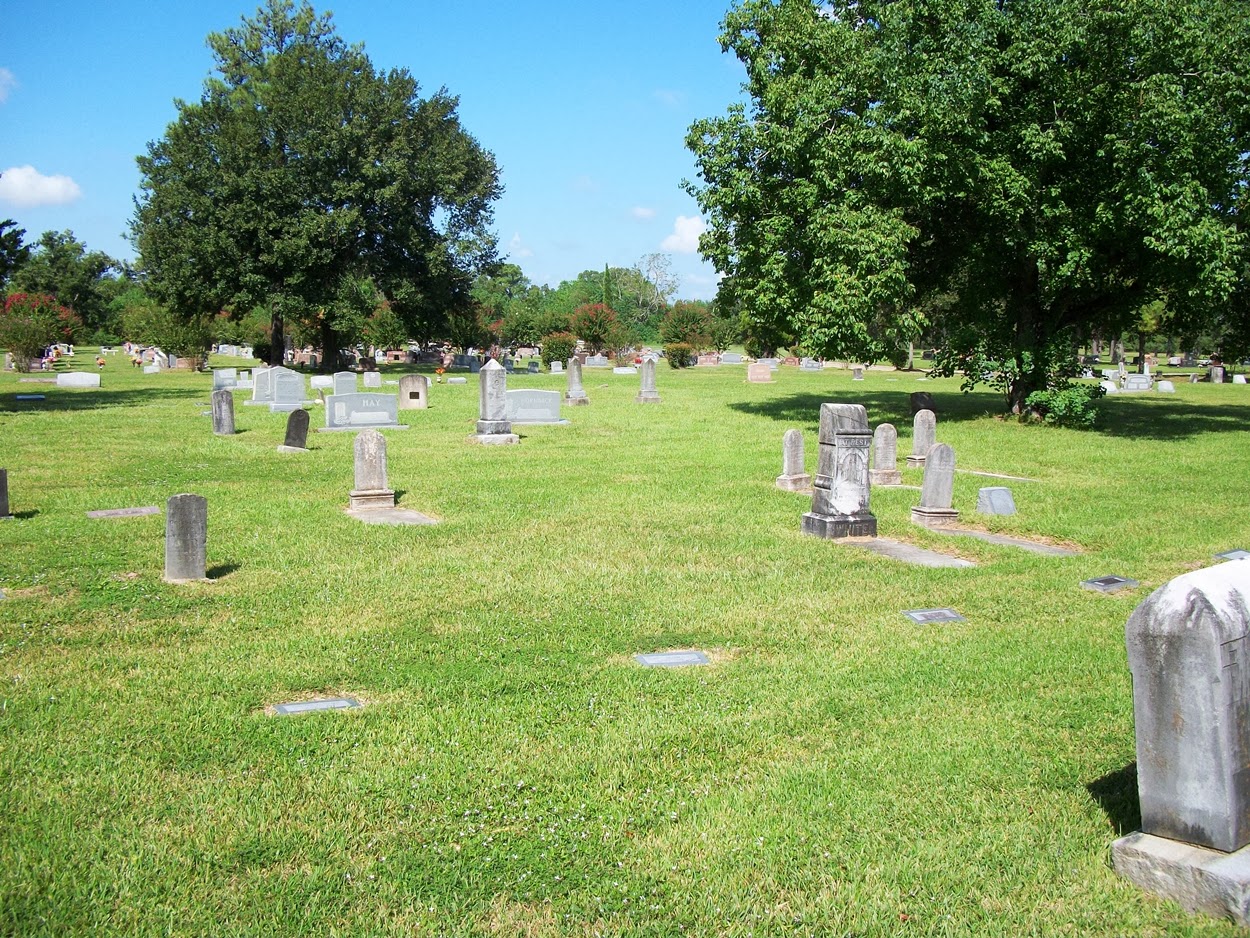