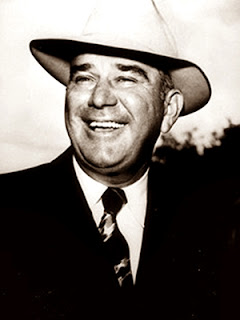 Homer Hill Norton, athlete and football coach, was born on December 30, 1896, in Carrollton, Alabama, the son of Rev. and Mrs. John W. Norton. He grew up and was educated in Birmingham, where his father served as a Methodist minister. Norton excelled in athletics at Birmingham Southern College, where he lettered in four sports. After graduation in 1916 he played with professional baseball teams in Alabama, North Carolina, and Florida. On December 2, 1917, he married Mabel Telton; they had four daughters. Norton ended his baseball career in 1920, when he took a football coaching position at Centenary College in Shreveport, Louisiana. There he served with Alvin Nugent (Bo) McMillin and Earl Davis before taking over as head coach in 1926 and compiling a record of sixty wins, nineteen losses, and nine ties.

Norton moved to Texas A&M in 1934 and by 1939 had brought football glory to the Texas Aggies. With All-Americans Joe Boyd and John Kimbrough, he led the Aggies in 1939 to an unbeaten season, a national championship, and victory over Tulane in the Sugar Bowl. Defeat by the University of Texas in 1940 prevented a second unbeaten season and an invitation to the Rose Bowl. Trips to the Cotton Bowl in 1941 and 1942 and to the Orange Bowl in 1944 highlighted Norton's later years at A&M. When his tenure ended in 1947, he had served longer than any other Aggieland coach at that time. His overall record there was eighty-two wins, fifty-two losses, nine ties, and three Southwest Conference championships. His coaching career spanned three decades (1920-47). He developed four All-Americans: guard Joe Eugene Routt, 1936 and 1937; tackle Joe Boyd, 1939; back "Jarrin'" John Kimbrough, 1939 and 1940; and guard Marshall Robnet, 1940. Norton was elected to the Helms Athletic Foundation Hall of Fame, the A&M Athletic Hall of Fame, and the Texas Sports Hall of Fame. After he retired, Norton became a sports columnist for the Houston Post and owned and operated several restaurants and a motel. In 1953, after his wife's death, he married Christine Sheppard, and they had one daughter. Norton died on May 26, 1965, and was buried in Forest Park Lawndale Cemetery, Houston. Source 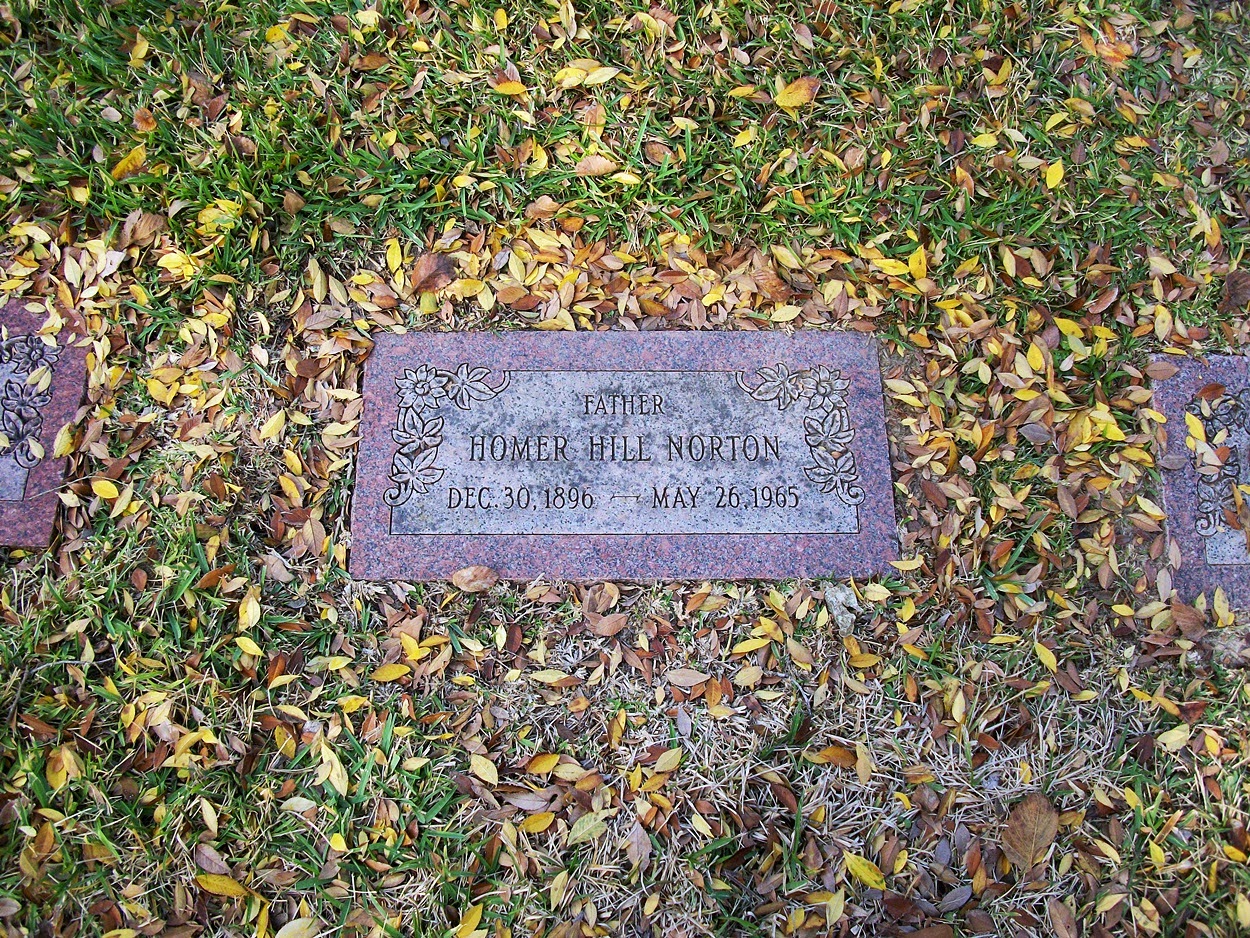 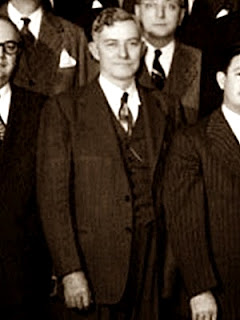 Jesse Martin Combs, jurist and congressman, son of Frank and Mary (Beck) Combs, was born in Shelby County, Texas, on July 7, 1889. He was orphaned as a small child and raised by his maternal grandparents, Mr. and Mrs. Jesse Beck. After graduating from Center High School, Combs attended San Marcos State Teachers College (now Southwest Texas State University) and received his degree in 1912. He taught at several rural schools before becoming the Hardin county agent in 1914. Four years later he was admitted to the bar and elected county judge. He subsequently served as judge for the Seventy-fifth District Court, which served Tyler, Hardin, Liberty, Chambers, and Montgomery counties. He moved to Beaumont and sat on the Ninth Court of Civil Appeals from 1933 to 1943. He was also influential in developing Beaumont's South Park school district, and was president of the Board of Trustees of Lamar Junior College (now Lamar University) from 1940 to 1944.

In May 1944 Combs announced that he would challenge incumbent Martin Dies for the Second Congressional District seat. Faced with a difficult battle, the controversial Dies decided not to seek reelection. Combs served four terms in Congress as a key associate of fellow Democrat Samuel T. (Sam) Rayburn. As a member of the House Ways and Means Committee, Combs was influential in securing federal appropriations for housing, industrial, and water projects, such as those at Dam B and McGee Bend. He opposed a large reduction in the capital-gains tax and supported President Harry Truman's 1947 loyalty order for government employees. Combs generally backed Truman in Congress, although he broke with the president over the Tidelands Controversy. Poor health led him not to seek reelection in 1952. He died of lung cancer on August 21, 1953, at Beaumont and was buried there in Magnolia Cemetery. He was a Baptist. Two sons and his wife of forty-two years, Katherine (Alford), survived the former congressman. Source 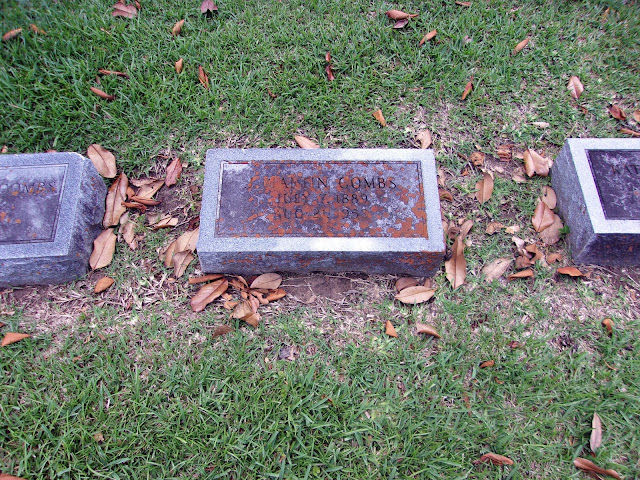 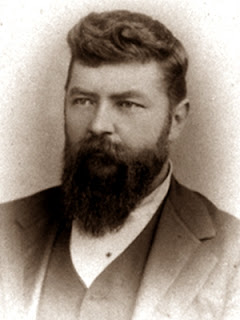 Rudolph Kleberg, politician, newspaperman, and attorney, was born on June 26, 1847, in a log cabin at Cat Spring, Texas, the son of Robert Justus and Rosalie (von Roeder) Kleberg. The family moved the next year to DeWitt County, where he received a private education. He served the Confederacy in 1864-65 in Gen. Thomas Green's Fourth Texas Cavalry. About 1868 he graduated from Concrete College in DeWitt County, after which he taught school at Yorktown and studied law in San Antonio. He was admitted to the bar in 1872 and began practice in Cuero, where, with the help of W. C. Bowen, he established the Cuero Star, a weekly newspaper that he edited for four years. He published outspoken editorials criticizing the violence that marked DeWitt County during Reconstruction, especially the Sutton-Taylor Feud.

He served as county attorney for DeWitt County from 1876 to 1880. In 1882 he formed a law partnership with William Henry Crain, and on November 7 of that year he was elected as a Democrat to the Texas Senate, where he served until 1884. As a member of the Committee on Finance he was instrumental in procuring the first general appropriation for the University of Texas and the funds to purchase the Alamo. In 1885 President Grover Cleveland appointed him United States attorney for the Western District of Texas, a position he held until 1889. In April 1896 he was elected to fill the vacancy in the United States Congress left by the death of his law partner, Crain; Kleberg was reelected to the Fifty-fifth, Fifty-sixth, and Fifty-seventh congresses and served until March 3, 1903. At the time of his death in Austin, on December 28, 1924, he was official court reporter of the Texas Court of Criminal Appeals, a post he had held since February 24, 1905. He was survived by his widow, the former Mathilde Elise Eckhardt, whom he had married in 1872, and five children. Source 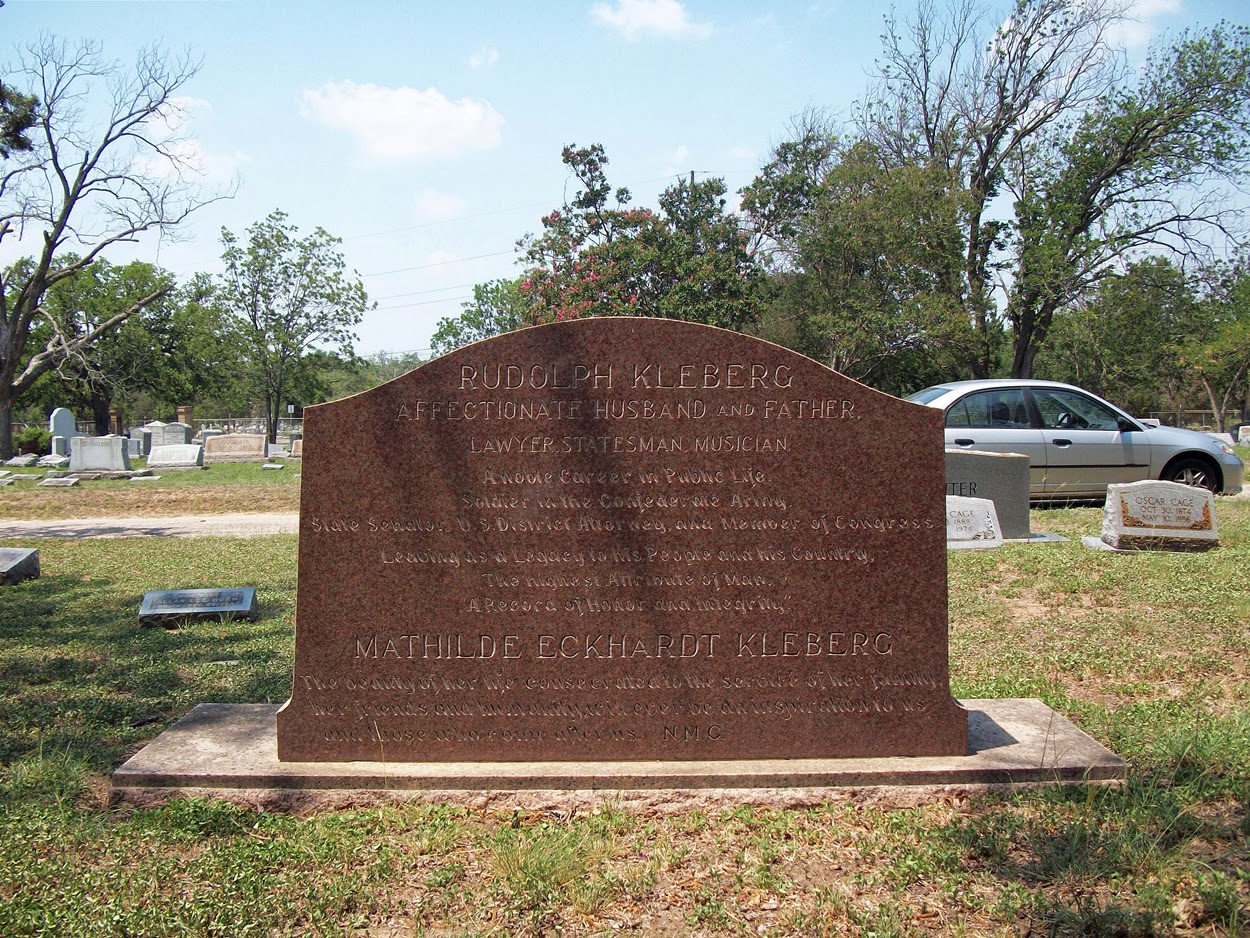 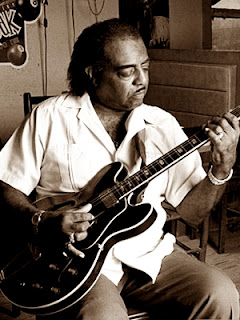 Pete Mayes was born and raised in Double Bayou, Texas. The town was home to a dance hall, which played a significant part in Mayes' life. As a child he learned with a cheap guitar without a full set of strings and practiced for hours each day. Mayes was aged 16 when T-Bone Walker invited him on stage to perform. In the early 1950s, Mayes played with various bands at his local dance hall. After several years he led his own group, opening the show for touring musicians. While in the United States Army, Mayes worked with The Contrasts, which comprised three white and three black musicians. Mayes learned from watching T-Bone Walker and Gatemouth Brown, and he later cited Walker, B.B. King, Kenny Burrell, plus Lowell Fulson as major influences.

In 1960 he relocated to Houston, and during the following decade he played with Fulson, Big Joe Turner, Percy Mayfield, Bill Doggett, and Junior Parker. Mayes also toured with the jazz musicians, Count Basie and Dizzy Gillespie. Unable to make a living as a full-time musician, Mayes worked as a ranch hand and then as a painter for the Houston Independent School District. He retired from the latter job with disability pay. Mayes did perform whenever possible. He undertook tours in the 1970s and played frequently in the 1990s, even though his health had started to fail. In 1983, he inherited from an uncle ownership of his local dance hall. In 1986, Double Trouble Records of the Netherlands issued Texas Guitar Master, which included a live "Battle of the Guitars" with Joe "Guitar" Hughes. In 1996, Mayes appeared on the bill of the Long Beach Blues Festival. By the time For Pete's Sake was released (1998), Mayes was still actively managing the Double Bayou dance hall. Following years of ill health, which included heart problems, diabetes and the amputation of both legs, Mayes died in Houston in December 2008, aged 70. He was survived by his wife, son and a brother. 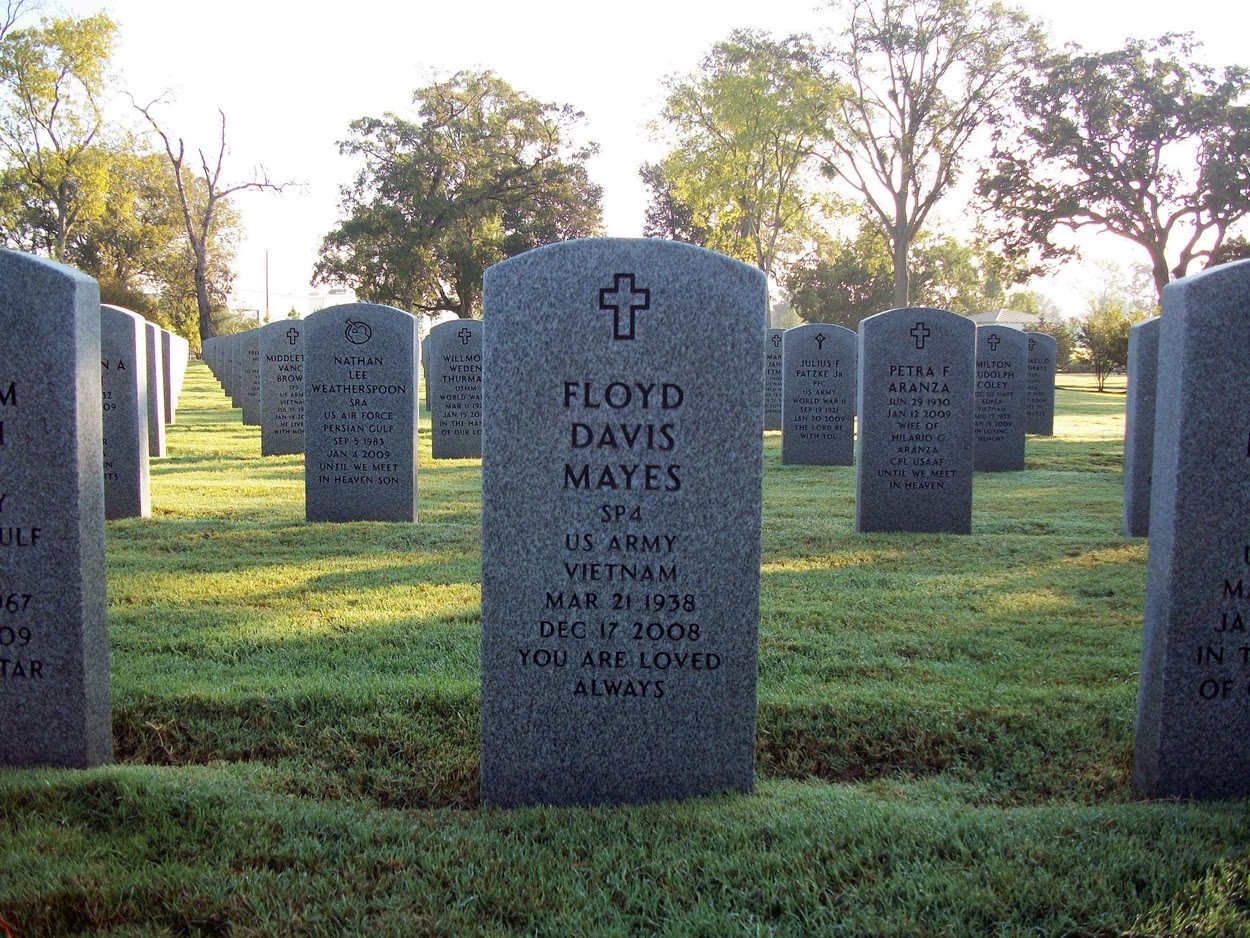