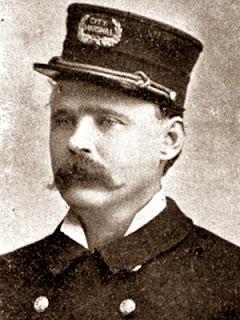 Ben Thompson, gunfighter and lawman, was born in Knottingley, Yorkshire, England on November 2, 1843, the child of William and Mary Ann (Baker) Thompson. His family emigrated to Austin, Texas, in the spring of 1851. He initially worked as a printer for various Austin newspapers. At age fifteen he wounded another boy during an argument about his shooting abilities. In 1859 Thompson traveled to New Orleans to work for a bookbinder and intervened on behalf of a woman being abused by a Frenchman. He reputedly killed the offender in a subsequent knife fight. At the outbreak of the Civil War, he enlisted on June 16, 1861, in Col. John (Rip) Ford's Second Texas Cavalry regiment. He participated in two actions, the battle of Galveston Bay, where he was wounded, and the Confederate defeat at La Fourche Crossing, Louisiana. On November 26, 1863, he married Catherine L. Moore, the daughter of a prominent Austin merchant, Martin Moore. After his marriage he returned to the army and served till the end of the war. In May 1865 Thompson fatally shot a teamster in Austin after the man pulled out a shotgun during an argument over an army mule. Later arrested by federal soldiers, Thompson broke jail and left the state to join Emperor Maximilian's forces in Mexico. Fighting until the fall of the empire in June 1867, Thompson received several promotions for gallantry in action. He then returned to Texas and slightly wounded his brother-in-law, Jim Moore, who was abusing his pregnant sister, Thompson's wife. Thompson was sentenced on October 20, 1868, to four years' hard labor and sent to the Texas State Penitentiary at Huntsville, where he was held for two years until his conviction by a military tribunal was deemed illegal and he was pardoned by President U. S. Grant.

After his release, he left Texas for Abilene, Kansas, undoubtedly hoping to change his fortunes. In 1871 he opened the Bull's Head Saloon with his Civil War friend, Philip H. Coe. The pair ran the drinking and gambling establishment while Abilene prospered as a railhead for the cattle drives originating in Texas. Thompson was involved in a buggy accident in Kansas City which also injured his son and his wife, who had her arm amputated. While Thompson was recovering, his partner Coe was killed in a shootout with Abilene marshal "Wild Bill" Hickok. In the summer of 1873 Thompson was working as a house gambler in an Ellsworth, Kansas, saloon with his younger brother Billy. On August 15, during a drunken altercation with other gamblers, Billy shot and killed Ellsworth sheriff Chauncey B. Whitney, a friend of the Thompson brothers. Billy Thompson fled Kansas and avoided authorities until 1876, when he was returned to Ellsworth, stood trial, and was acquitted. The jury ruled that the shooting was an accident. Aside from a visit to Kansas in the spring of 1874, Ben Thompson made his living as a gambler in various Texas cities between 1874 and 1879. On December 25, 1876, Thompson was at Austin's Capital Theatre with several friends when a fight erupted. When Thompson tried to intervene on behalf of one of the troublemakers, theater owner Mark Wilson emerged with a shotgun. In the ensuing fracas, Wilson fired at Thompson and was killed by three fast return shots. Thompson was found to have fired in self-defense.

The Leadville, Colorado, silver strike lured Thomson to visit Colorado several times during the spring and summer of 1879. There he joined a group of Kansas gunmen led by Bartholomew (Bat) Masterson who were hired by the Atchison, Topeka and Santa Fe Railway in a right-of-way dispute with the Denver and Rio Grande Railroad. Well paid by the Santa Fe for his services as a hired gun, Thompson returned to Austin and opened a gambling hall above the Iron Front Saloon on Congress Avenue. According to Lafayette Rogers, a local patron of the Iron Front, "Ben...never run a crooked game in his house." Thompson's acknowledged honesty, loyalty, generosity, and prowess with a revolver impressed the citizens of Austin enough that they twice elected him city marshal. First winning office in December 1880, he proved to be an excellent officer, some claiming that he was the finest marshal that Austin had known up to that time, and was re-elected in November of the following year. In July 1882, while still serving as marshal, Thompson quarreled over a card game in a saloon in San Antonio, where he killed the prominent sportsman and owner of the Vaudeville Theatre, Jack Harris. He was indicted for the murder and resigned as marshal. After a sensational trial and acquittal, he returned to Austin to a hero's welcome and resumed his life as a professional gambler. On the evening of March 11, 1884, Thompson brashly returned to the Vaudeville Theatre with his notorious friend John King Fisher, deputy sheriff of Uvalde County. Word of their arrival in San Antonio preceded them. Within minutes of stepping into the Vaudeville the two were shot and killed from behind. Many believed that Harris's friends and partners, Joe Foster and William Simms, arranged the assassination. Thompson was survived by his wife, Catherine, and two children, Ben and Katy. He was buried in Oakwood Cemetery. Austin newspaper editors engaged those of San Antonio in a free-wheeling, nasty debate after a coroner's jury in San Antonio ruled the killing self-defense and no one was ever charged with the murders. Source 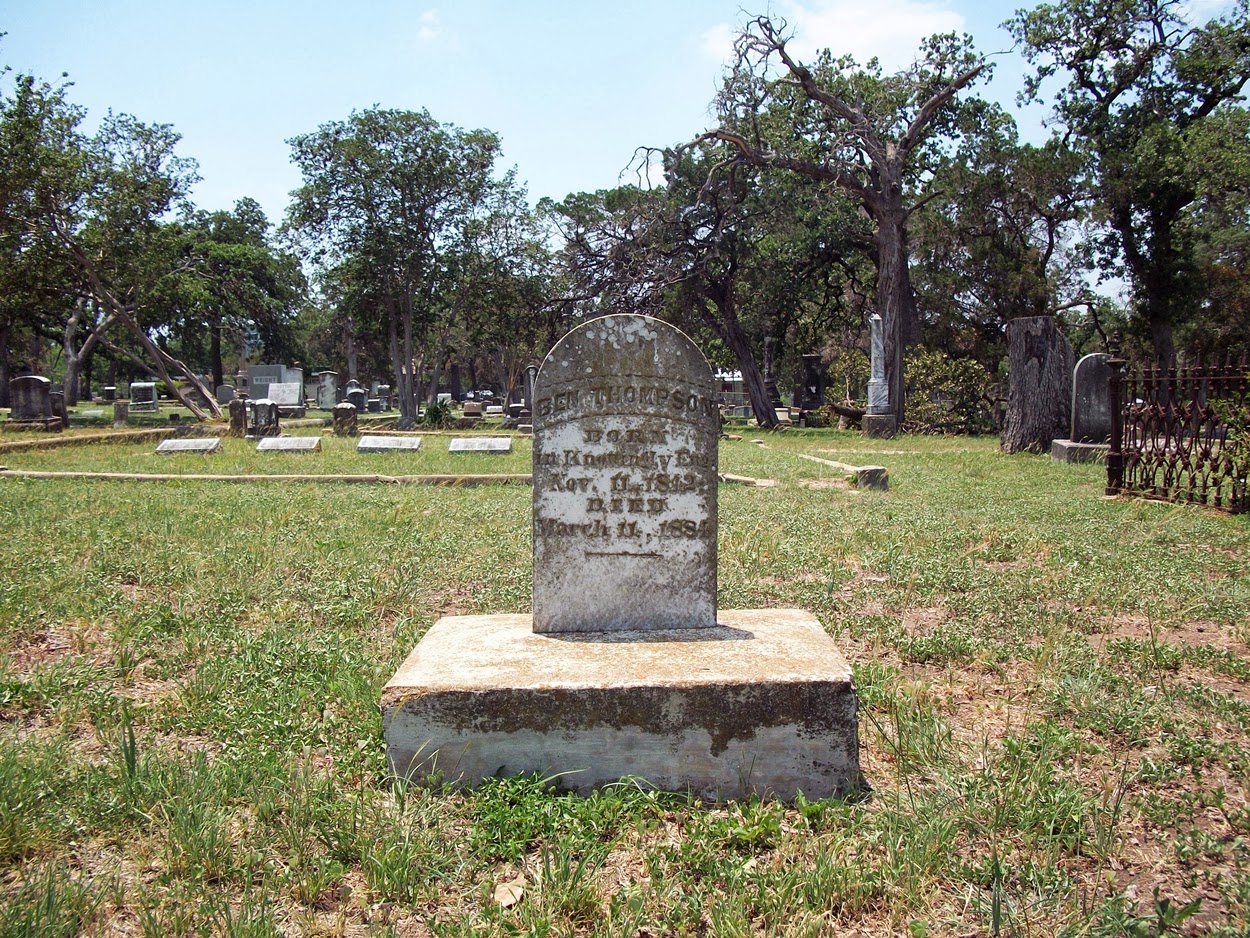 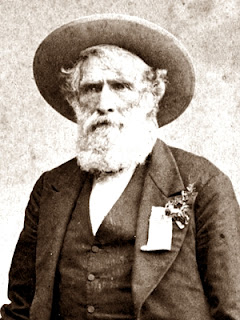 "Bigfoot" Wallace, soldier and Texas Ranger, the son of Andrew and Jane Ann (Blair) Wallace, was born in Lexington, Virginia, on April 3, 1817. He was descended from Highlanders William Wallace and Robert Bruce, and the clan instinct was strong in him. In 1836, when he learned that a brother and a cousin had been shot down in the Goliad Massacre, he set out for Texas to "take pay out of the Mexicans." A good many years later he told John C. Duval that he believed the account had been squared. Wallace was a magnificent physical specimen. In his prime he stood six feet two inches "in his moccasins," and weighed 240 pounds without surplus fat. For a while he tried farming in the vicinity of La Grange, but the occupation was not to his taste. In the spring of 1840 he moved to Austin, saw the last buffalo of the region run down Congress Avenue, decided that people were getting too thick, and moved to San Antonio. He was with the Texans who fought Gen. Adrián Woll's invading Mexican army near San Antonio in 1842 and then volunteered for the Somervell and Mier expeditions. Some of his most graphic memories were of his experiences in Perote Prison. As soon as he was released, he joined the Texas Rangers under John Coffee (Jack) Hays and was with the rangers in the Mexican War.

In the 1850s Wallace commanded, as captain, a ranger company of his own, fighting border bandits as well as Indians. He was so expert at trailing that he was frequently called upon to track down runaway slaves trying to get to Mexico. He drove a mail hack from San Antonio to El Paso and on one occasion, after losing his mules to Indians, walked to El Paso and ate twenty-seven eggs at the first Mexican house he came to - before going on to town for a full meal. During the Civil War he helped guard the frontier against the Comanche Indians. At one time Wallace had a little ranch on the Medina River on land granted him by the state of Texas. The later years of his life were spent in Frio County in the vicinity of a small village named Bigfoot. He never married. He was a mellow and convivial soul who liked to sit in a roomy rawhide-bottomed chair in the shade of his shanty and tell over the stories of his career. Occasionally he rode to San Antonio; less occasionally he would go to Austin and consort with "Texas John" Duval. Wallace was as honest as daylight but liked to stretch the blanket and embroider his stories. He read and was no illiterate frontiersman, but he summed up in himself all the frontiers of the Southwest. His picturesqueness, humor, vitality, and representativeness of old-timey free days, free ways, and free land have broken down the literalness of every writer who has treated of him. Without directing events, he was there when they happened - and he was a tale-teller. As a folk hero he belongs more to social than to military history. Wallace died on January 7, 1899, and shortly thereafter the Texas legislature appropriated money for moving his body to the State Cemetery. Source 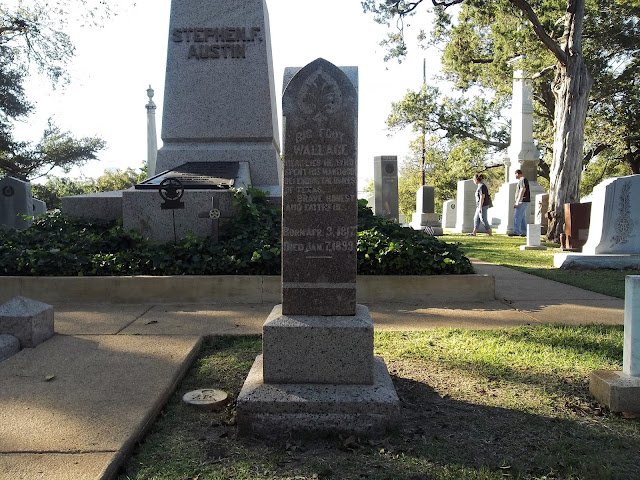 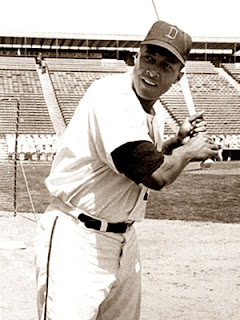 A baseball player of imposing size, Walt Bond stood 6 feet 7 inches and weighed 228 pounds, making him an effective power hitter during his minor league career. He was diagnosed with leukemia in 1962, but still batted a strong .320 in 132 games for the Salt Lake City Bees of the Triple-A Pacific Coast League. Then, in a 12-game September stint with the Indians, Bond hit six home runs in only 50 at bats, drove in 17 runs, batted .380 and slugged .800 - yet he could not make the 1963 Indians roster and spent that season still in Triple-A. On December 19, 1963, he was acquired by Houston. The Colt .45s' general manager was aware of Bond's illness, but the team doctor examined him and determined that the leukemia was in remission. Bond then turned in his best Major League season as the starting first baseman for the 1964 Colt .45s, leading Houston in home runs and runs batted in, and appearing in 148 games. The following year, Bond held onto his starting job, but his production slumped with the team's move into the Astrodome; some teammates speculated that his leukemia had recurred that season, affecting his play. Traded to the Twins just before the 1966 season, he returned to Triple-A and batted .316 with 18 home runs in 122 games for the Denver Bears, earning an invitation to spring training for 1967. Bond made the team and batted .313 in part-time duty during the season's first month, but the Twins released him on May 15 Although Bond was snapped up by the Jacksonville Suns, his declining health forced him to the sidelines after only three games. He entered a Houston hospital for cancer treatment, but died there on September 14, 1967 at age 29. 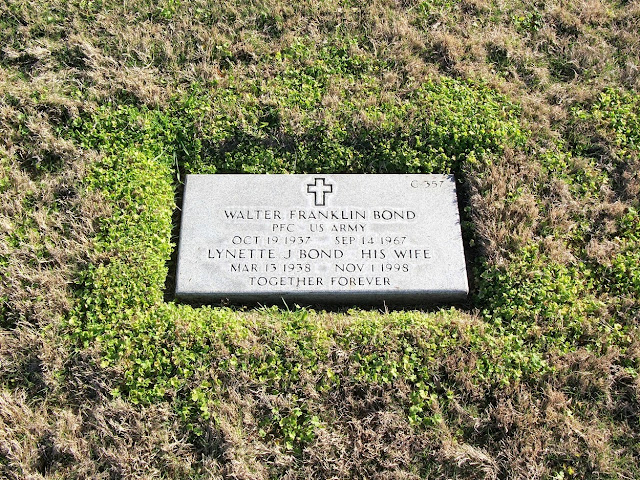 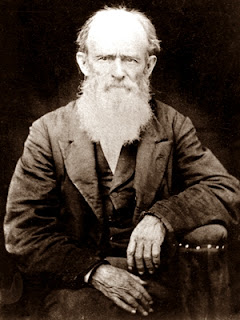 Crawford, the last surviving signer of the Texas Declaration of Independence, son of Archibald and Nancy (Carroll) Crawford, was born in Fayetteville, North Carolina, on September 13, 1804. He was related to Charles Carroll, the last surviving signer of the United States Declaration of Independence. The family moved to Georgia, where both parents died about 1821. Crawford was a tailor's apprentice from 1821 or 1822 until 1830, when he became a Methodist minister and was assigned to a circuit in Alabama. In 1834 he married Rhoda Jackson Watkins. Later, because of ill health, he moved to Texas with his wife's family. The caravan arrived in January 1835 and settled near the site of Shelbyville. The Crawfords became the parents of nine children. Crawford and Sydney O. Penington represented Shelby County at the Convention of 1836 at Washington-on-the-Brazos and there signed the Declaration of Independence. In 1859 Crawford moved to Pittsburg, Camp County, where he was postmaster from 1874 to 1881. His wife died on January 18, 1881, and Crawford moved to Hill County, where he lived until 1884, when he moved to Alvarado, Johnson County, to live with a daughter. He died on September 3, 1895, while he was visiting his son in Erath County. He was buried in Cow Creek Cemetery, about five miles north of Dublin. In 1936 his remains were reinterred in the State Cemetery. Source